Preparing for travel, with technology in mind 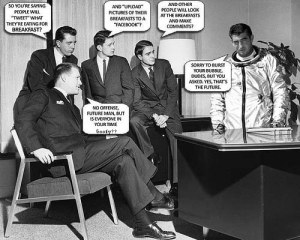 As I gather my list together for what I need to pack and items still to get for the journey, I notice that there is one big difference between when I last travelled to Scotland in 2006 and now in 2014.

Technology has blown up, or rather I have come to rely heavily on smartphones, gadgets, devices, and tablets. That, and I must begrudgingly admit, 2006 was a heck of a long time ago.

One example is that I purchased a purse today, not just based on what it looked like, but that it was big enough to hold my tablet and my phone along with miscellaneous other crap that I cannot seem to survive without. In my defence, I can also use my purse as a weapon, I pity anyone on the other end of that receiving brunt haha 😉

When I think back to what I had packed backed then; I had a magazine, a Sudoku puzzle book, and a Canon Sure Shot camera with a few rolls of film. That same camera is still in my possession, but it has resumed its post as a reprised dust collector. It is far more convenient to whip out the phone and snap a shot then it is to pull out the camera, focus it, and snap. ~That, I find a bit sad, but C’est la vie.

I spent about an hour today after my work day researching and pricing out a portable battery charger that could charge an iPhone, an Android, a Tablet, and any USB device that I had. I picked one out, will review it once I put it through its paces, but it seemed like the best value for $40.

Now that I have the “charging-when-I’m-not-near-a-power-source” scenario covered I need to worry about data. My local provider is so not the way to go when you are overseas. So scratch getting a plan for my phone, no upgrade either at the moment.

An unlocked phone that you can put various country SIM cards into and add different plans seems like the smartest way to go when you are international in many countries. If the person you are travelling with has one, even better! There is always wifi when you look for it, and the personal hotspot. FYI, you can get an unlocked Google Nexus 5 from Google Play for about $350 and it is great to travel with.

So I am not fully packed yet, but I am scratching a few more items off my list, only 10 more sleeps until the big day!